I've always loved the Christmas season. However, this past week has been extremely hectic and stressful. Between trying to get the house clean and ready for the Tacky Christmas Party, getting my students presents ready, making my co-workers presents, and getting all my other Christmas presents bought and wrapped (I'm going out of town for some of next week so I had to have this done by Saturday.)...on top of having a job that doesn't just end at 3:00 when the bell rings, attempting to work out and cook dinner at least 4 days a week...it has been busy to say the least. Every time Diego would ask if we could go do something or run an errand I would fuss at him about all the things on my to do list and how I didn't have any time and what was he thinking?! This caused him to start reenacting the scene from Saved by the Bell where Jessie is addicted to sleeping pills because...say it with me now..."There's no time, there's never any time, I don't have time to study. I'll never get into Stanford..." You know you have that scene memorized too...especially if you grew up in the 90s. His twist of course said, "There's no time for Christmas!!" Although it was funny (and slightly irritating)...I realized something...he was right. I was all stressed about getting everything done that I wasn't even enjoying Christmas. So I decided to make sure I let myself relax and take in the joy of the season. (Sorry for the cheesiness.) Rather than being rushed to go find presents for everyone, I remembered that I actually love shopping for others and finding the perfect gifts for them. (I also took advantage of the awesomeness that is online shopping for many.) Instead of being worried about getting all the school gifts done...I relished in the fun of making homemade gifts for my co-workers and the truly wonderful group of students that I have this year (plus, Diego helped tremendously with my kids gifts). Then last night, I got to do one of my favorite things about the Christmas season...wrap presents! I got this from my mom. Every year she set up a giant wrapping station full of pretty papers, beautiful ribbons, and fun package decorations. I could never set up an entire wrapping station in my tiny apartment so I finally got to this year in my new house (and I was lucky enough to get lots of Mom's extras as she tries to downsize). So I turned on the Christmas music and got to work. Maybe someday my bows will look as good as hers.

I am one of the many who is currently hooked on Pinterest. Talk about addicting. The only problem is that I wish I could actually "do" as fast as I "pin". However, I did do a couple DIY projects this Summer that I had found inspiration from Pinterest. I've been meaning to post them since Summer but school started therefore nothing else really happens except grading, planning, and cutting lamination.

I'm realizing I really need to improve my photography skills but bear with me for now.
First up is my pom-pom flowers as a Spring/Summer centerpiece on my dining room table. (Currently the vase is filled with mini-pumpkins for Fall but these will come back out in the Spring.) I just used tulle, sticks from my yard, and rocks. The colors of the flowers match the fabric I recently used for the chairs. I got my inspiration (and my tutorial on how to make them) mainly from here and here. 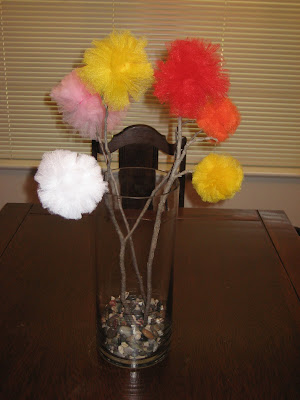 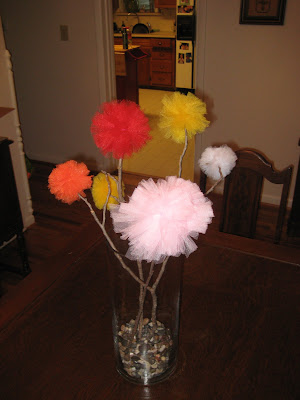 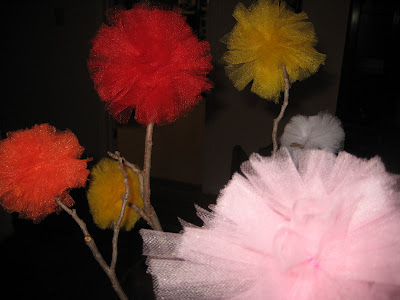 I also made this calendar with the idea from here. I made mine a Western theme to match my kitchen's style. It is hard to read in the picture but on the right side I have a "To do" list and a "To Buy" list. I bought a frame from Hobby Lobby and then used scrapbook paper, stickers, a little twine, and sharpie (The sharpie is on the inside of the glass for the lines and then I use dry erase markers to write on it.) 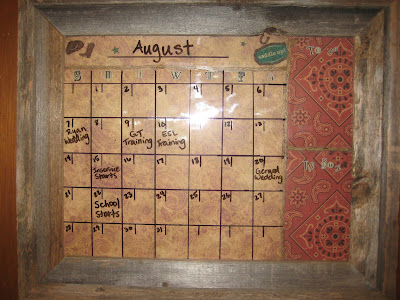 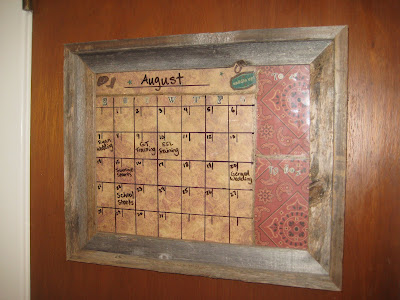 What the Kids are Saying...

It's time for the annual student survey! I know you've been patiently awaiting. For those who don't know, I give my students a survey at the beginning of the year to get to know them. It always provides some entertainment. I didn't think the answers weren't quite as funny this year but I still found a few gems.


What do you like to do in your spare time?
- Sometimes I spy on my dog to see what he's doing
- Read and use some electronics (Example) TV

What are some things you know a lot about?
- I know alot about tennis. You need to hit the ball
- That school starts at 7:00 am
- Cars-how fast they are and how slow they are
- Flowers and the water cycle

What are some things you would like to know more about?
-How you feel when you know alot

If you were given $1000, what would you do with it? (These answers were just sweet rather than funny)
- I would use it for emergencies only
- Buy my parents a house
- I would help my mom and dad pay the bills

What interesting places have you visited.
- I visited NRH20 because it cools me off.
- I have visited Golden Corral
- The Pyramids

If you could be a famous person...
- I would be Miley Cyrus because she sings so pretty.
- President because I would change one law
- Michael Jackson because he has lots of dance moves

Now that I have an entire house to decorate and take care of I've become much more into doing DIY projects because its fun and saves money. I have loved having the summer off to get some projects checked off my list. I was lucky to get a dining table set that belonged to my great-grandad when my Mom moved in with her new hubs. I love old furniture...I just think it has so much character. However, the chairs definitely needed some updating so I recovered the cushions. Here are the before and after shots. What do you think? I'll be sharing a few more of my projects soon... 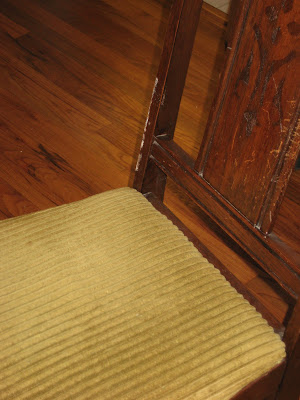 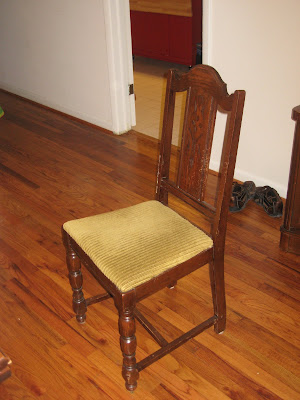 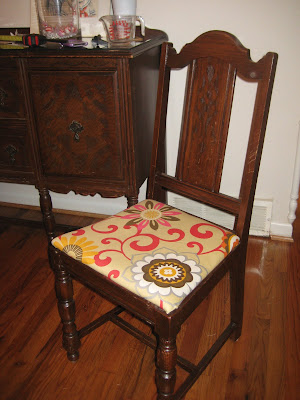 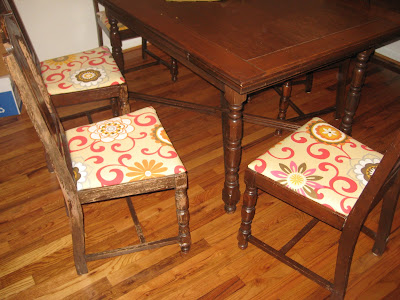 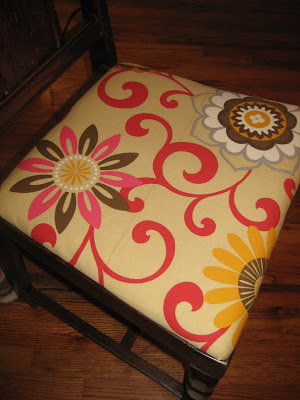 Diego was joking around the other day that I always like to put my two cents into every situation. So it gave me an idea for a blog. Thought I'd share my two cents on a few random musings for the blog world...since I know all of you care as much as Diego does for my opinion.

- Debt crisis: I really am no expert on what is going on with this because frankly I just find it all frustrating and frightening. (If you want a more knowledgeable opinion, I suggest you read someone's blog who is much more educated on the subject such as my sister-in-law.) What I do know is I'm exhausted with how bipartisan everything is now. At this point I don't even care what the outcome is...I just want both sides to remember what it means to compromise. Come on guys, this is something you learn in elementary school. Listening to this back and forth sounds as immature as my kids' arguments at recess. Can we all be adults please?
note: Just saw that they may have reached an agreement...hallejujah...but still my point extends to the government beyond this issue.

- Pinterest is a fantasically fabulous way for me to be productive waste even more time on the computer.

- I'm kind of over Lady Gaga's constant extreme weirdness but her songs are just so fun.

- I think the latest dance craze, the Shuffle, is just a less structured running man. Come on kids, we were doing that move 20 years ago :)

- Wait, hold the phone! Amy Winehouse died of a drug overdose?!?! (This is when I need a sarcasm font.)

- I can't decide who Ashley should pick...I really like JP but not sure I want him with her. Is that mean? And on that subject, I'm still very annoyed with the producers of the show who let Bentley parade around being his jerky self without giving Ashley the heads up.

- So its hot outside. No surprise there to anyone in Texas. Here's the thing, I know August is always the hottest but it didn't dawn on me until I saw the high temperatures expected for this week of 108 to 110 that it would actually get hotter than the 105 that we have been having. I just thought the unusually extreme hot June and July would just extend into August rather than it actually getting worse.

Tune in next time for more of my 2 cents. I'm sure you found it riveting. Maybe I should rename my blog that?

My first big project for my new house was to paint the hall bathroom. It had an ugly wallpaper on it that had to come down immediately. The actual taking down of the wallpaper proved to be more of a task than we anticipated but we finally got it all done. I wanted to paint the walls a color so that they would go with the shower curtain I have because I really love the colors in the curtain. It might have turned out brighter than we expected but I really like it. Even if Diego calls it the La Bamba bathroom because of its brightness :)


A huge thank you to all my helpers...actually I think I was more their helper :)

- Thank you Mom and Warren for plastering the wall.

- Thank you Mom and Sarah Quintana for painting the primer.

- Thank you Mom for helping me take down the wallpaper and painting the room. (Notice a trend here? Yeah, Mom helped me quite a bit!) I'm very blessed!

The pictures are not wonderful because it was hard to get good pictures in such a small space but here ya go... 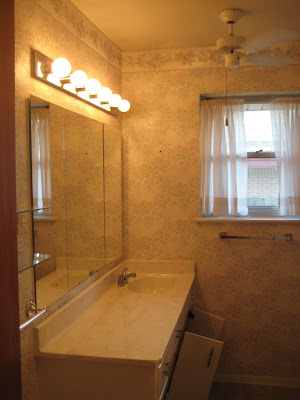 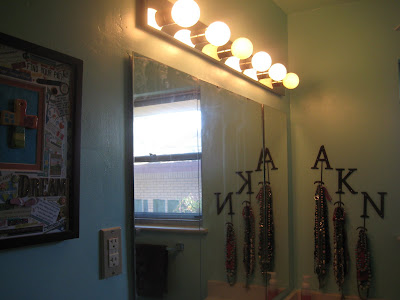 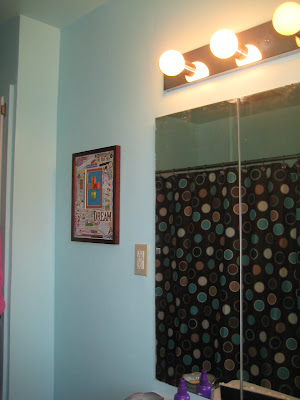 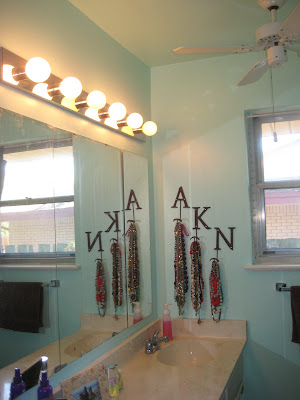 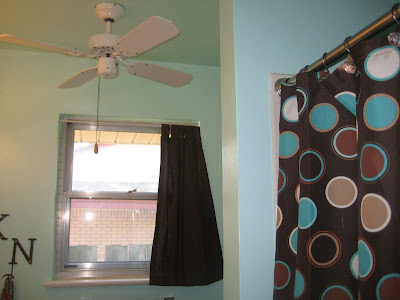 I could blog about...

I know it seems I've abandoned my blog. And I know I basically have but I'm just not ready to completely let it go yet. I promise I have all these grand plans of things to blog about but haven't been home for long enough all summer to actually do it. So for now here is a preview of what I hope to blog about in the future. No promises but definitely good intentions...

1. Updated pictures of my house now that I actually have furniture in it. I definitely will do a before and after of my bathroom transformation.
2. River trip with dad and Katie. We had a very fun weekend at the river. Here's one of Gruene Hall.

3. Alaska cruise with Diego's family and Seattle--we had a wonderful time and after I can sort through and pick a few pictures I will try to post them. Here is one of the Mendenhall Glacier and Nugget Falls for now.

4. California-- we are currently out here for my beautiful mom's wedding...and some fun beach vacation/family time too :) Hopefully more pictures to come....

- Posted using BlogPress from my iPhone