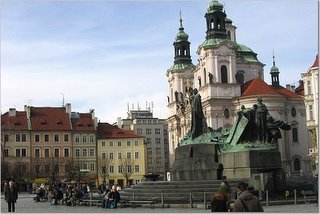 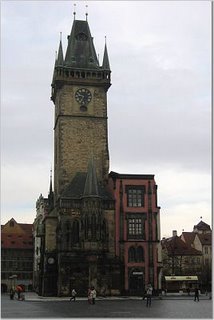 Old Town Hall -- We went up into the tower and took pictures looking out onto the city. Those pictures are below 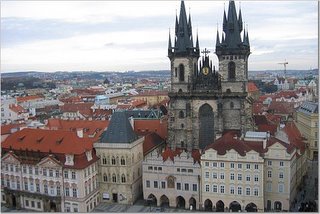 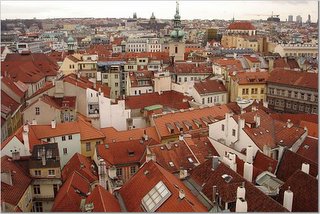 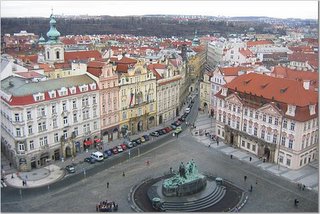 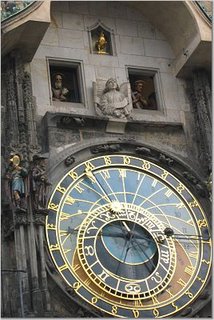 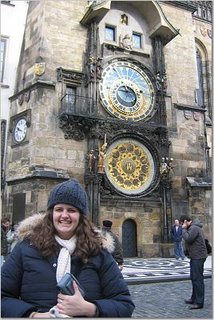 (Above) The apostles during the chiming on the hour. 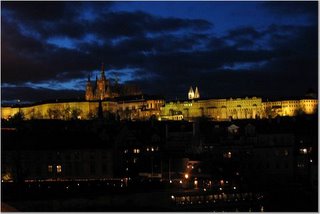 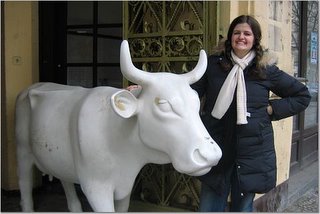 Prague Castle by night and I found a longhorn all the way in Prague!

Molly and I went on another European excursion this weekend to Prague. It was such a cute city and really was as great as everyone says it is.

We took an overnight train for the first time on the way there which was an interesting experience and slightly scary. The best part was sharing the car with a Spanish couple who apparently were in a little fight and the girl was crying for the half the ride. Thank goodness they got off in Bratislava so we had the cabin to ourselves the majority of the way. Our train got into Prague at 6 am so we really got to see the city wake up!

Prague is a really compact city so we were able to walk all around the citycenter the two days we were there. It is all cobblestone streets which is as cute as can be but is not great on the feet after long days of walking.We went to all the parts of the city center: Old Town, New Town, JewishQuarter, Castle & Hradcany, and Little Quarter. We saw Old Town Square with the Old Town Hall that has an astronomical clock on it. Every hour apostle figures appear in the clock windows as the clock chimes. It is cool and it so funny to see the crowd gather every hour to watch it. We walked across Charles Bridge several times, which is always (even in the cold of February) lined with artists and musicians. We went up to the castle area twice and when I say up, I mean UP -- a long,steep cobble stoned road...and yes we were brilliant and did it twice. There was probably a tram to go up but we apparently preferred walking. We took a tour of the castle area and saw the Royal Palace, St. Vitus' Cathedral, Powder Tower, and Golden Lane. Construction began on St. Vitus' Cathedral 800 years ago and wasn't completed until 1925. It is an enormous cathedral. The Royal Palace was very medieval inside and unlike any palace we had seen so far.

Again, we saw several churches which were gorgeous. Its amazing how different the interiors of all these churches have been from each other. We saw Wenceslas Square, the National Museum, and the National Theater. We also had the great idea of going to the Jewish quarter on a Saturday. Yes, on their holy day. Yes, everything was closed to the public. But the buildings and Old Jewish Cemetery were great from the outside!

First night in Prague and where did we go to dinner? A mexican food restaurant! We have been craving Mexican for so long. It actually was good too. The fajitas were great. The main difference was that you do not get unlimited chips and salsa for free because nothing is free here and the queso ( or more so a cheese dip) was served cold. I was very disappointed because we did not see any kolaches (like the Little Czech Stop in West, Texas that are delicious). I think West, Texas is tricking us by saying those are popular in the Czech Republic.

It won't let me add pictures right now for some reason but I will try again soon. (Not that any of you are probably up right now reading blogs anyway since it is so early there. If you want to look at more of my pictures I forgot to tell you that I have a picture site full of them. They are at- http://ashleykate.shutterfly.com/. I willalso be adding pictures of our kids at school soon to the Budapest album.They are such cute kids!! I can't believe we only have 1 more week here. I feel like we have been here forever but at the same time it has gone by so fast. Can't wait to see you all soon!

Molly, Doug and I went to Vienna this past weekend. It was wonderful! It snowed on us all weekend which made it very cold but very pretty. Vienna is much more modernized than Budapest...not that Budapest isn't modern but Vienna is just more commercialized and geared towards tourists. The people were also extremely friendly...eager to talk to us everywhere we went which is also different than here. I think the big differences between the two cities is because Vienna was not under communism like Budapest was until 1989. Budapest is just now learning how to be a tourist city and have customer service it seems. I love it though.

We crammed alot into our Vienna weekend. We saw many churches (Stephansdome, Peterskirche, Karlskirche), Parliament, Belevedere Palace, Schonbrunn Palace, the State Opera House, Stephansplatz and Grabenstrasse (big shopping areas), Neus Rauthaus (City Hall) and Bergtheater. In a random restaurant one night we ran into a guy who graduated from TCU in 2000. He lives in Chicago now and was skiing with friends in Austria. He had actually studied abroad in Budapest when he went to TCU too. Such a small world! Here are a few pictures from Vienna. 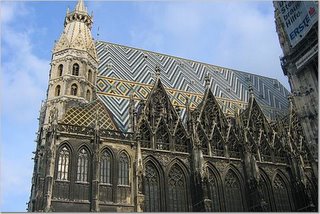 Stephansdome (St. Stephans Cathedral) -- Gorgeous church and it is randomly right in the middle of the huge shopping streets. Those pretty blue skies are very deceiving in this picture. 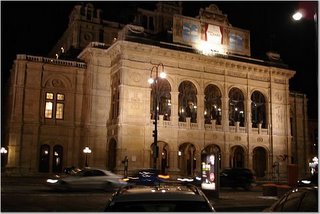 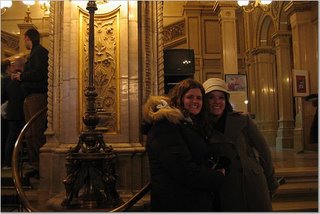 The State Opera House and Molly and I inside it. We went and saw the opera, Tristan and Isolde. We got extremely cheap standing room tickets. The opera was 5 and 1/2 hours long though so we only made it through the first half since we were standing! 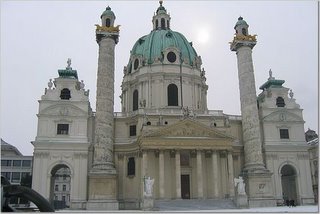 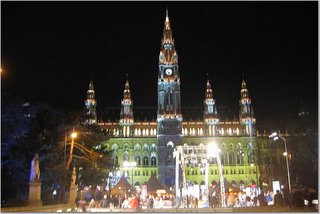 (Left) Karlskirche (St. Charles' Church) and (Right) Neus Rauthaus -- The city hall has a winter festival out in front of it with an ice skating rink. It was a very fun place. 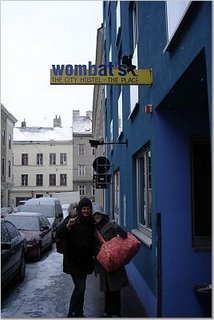 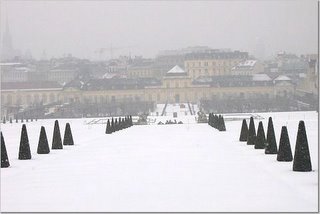 (Above) Molly and I outside our hostel...get excited.

(Right) The Belevedere Palace and its beautiful gardens, which we quickly realized are much prettier when they are not covered by snow. 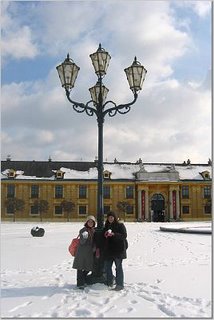 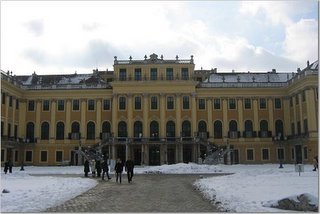 Schonbrunn Palace. We took a tour of it...it was built by the Hapsburgs to show off their wealth so the rooms and the entire area are very lavishly done. Molly and I wanted to have a snowball fight but Doug would not play. 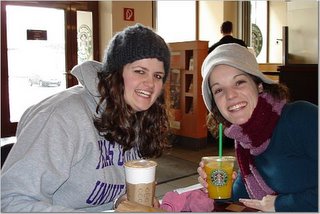 We had to be American and go to Starbucks. Vienna has the closest starbucks to Budapest and I miss my big cups of coffee.

We are going to Prague this weekend...so more pictures soon!

We have now been here a week and a half and Budapest and our little hotel has really begun to feel like home. Not that I don't miss Fort Worth and wouldn't give anything for some chips and queso right now. The food isn't bad here...just really different and heavy...a lot of paprika and cabbage. Last week we finished up the majority of our sightseeing. One of the most interesting places we went to was the House of Terror...it used to house the secret police for the Nazis and then the communists and where thousands were tortured and killed. It is a now museum about life under the nazi and communist regime. An extremely interesting museum. We also went took a tour of Parliament...an amazing building and of the State Opera House. Bass Hall is designed after the interior of this opera house. We went to Statue Park (where they took all the communist statues after the fall in 1989), Margerit Island, Hungarian National Museum, St. Stephen's Basilica, and of course have done some shopping. We also went ice skating tonight and I didn't fall at all! It has snowed here the past couple of days...gorgeous!!

We started teaching this week and they really threw us right in...nevermind that the children don't necessarily speak English. On my 3rd day today, I taught 3 of my 4 classes all by myself with no teacher in the room...again not all the children speak English. It is so fun when you are standing at the front of the room and the children start speaking to each other in Hungarian and then laughing. All in all though I am loving my experience. The children are great and the school is completely different than American schools. I'll explain more about the differences in another post later since this one is getting kind of long.

Here are some more pics for you. Miss you! 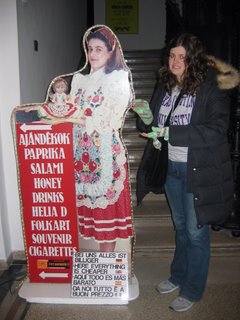 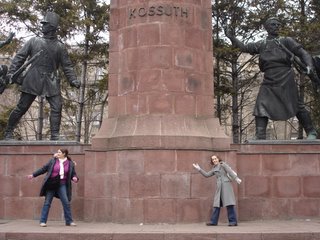 Molly and I impersonating the Kossuth statue...I'm sure the Hungarians love us mimicking one of their important leaders of the past. 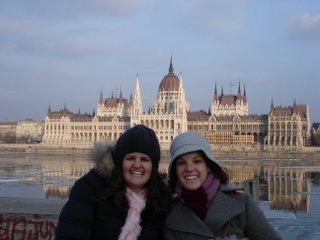 Molly and I in front of Parliament--doesn't it look like we pasted it in the background. 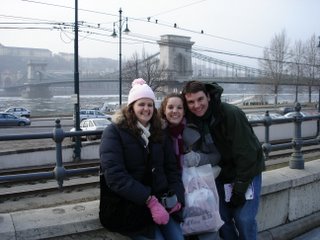 Me, Molly and Mark and the Chain Bridge 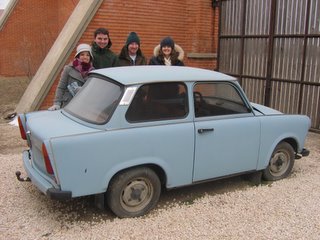 Molly, Mark, Doug, and Me in front of an old car at Statue Park...we made friends with this nice dentist in the army stationed in Germany who took this picture for us...he said it was the "perfect picture"...really? 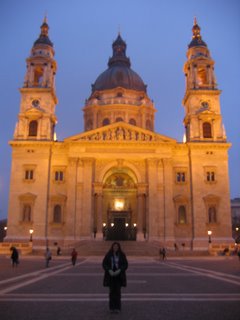