I had said in one of my previous posts that I love going to the drive-in movie theater (the one or two times that I have been) and that I wished there were more drive-in theaters around. Then looked what popped up on my Yahoo Headlines today...

One of my favorite things to do is to go sit outside at Starbucks and read. Read for fun, not for school. It is just such a great atmosphere. Yes I know there are plenty of better coffee houses the ultimate chain of Starbucks but it is the most convenient for me with outside seating. I wish Ft. Worth had more hole in the wall coffee houses. I like to go either on my own or with a friend. Alison (who still has not guest blogged on here as she promised) and I both love the Starbucks ritual. Whenever we are being unproductive (which can be often) and just want to go read or chat we usually head to Starbucks. We went last night and the weather was perfect...surprisingly cool. As I'm reading (and now listening to my new iPod) I also love to people watch. I probably watch and listen to their conversations far more than I should or is polite. I love trying to figure out what people's stories are, who they are their with, what they are doing, etc. Sometimes people just start random conversations with you which is fun. Alison briefly talked with 3 Italian men last night because she is taking Italian. She is better and starting conversations with strangers than I am. I could probably do a whole series on my blog about the people I see at Starbucks. I hate it when I am too busy to get my Starbucks fix.

Last week we had family in town from Texarkana. It is my mom's brother's family...we don't see them very often. My youngest cousin, Rebecca, is Miss Teen Texarkana so they came here to compete in Miss Teen Texas. This was quite an experience. Now I have always loved watching pageants on TV but seeing it a little more first hand is a whole different thing. It was still very fun to watch but all the drama is crazy. So many of these girls make a career of pageanting. One of the girls in the Miss Texas pageant who is 24 now has been in a major pageant every year since she was 13 and many of the girls are like her! I can't even imagine. Quick funny story...in the "interview" round the questions were pretty dumb. One girls question was "what is your idea of a perfect day?" and she answered her idea of a perfect date...it reminded me of Miss Congeniality when she says her perfect date is like April 15th...not too hot not too cold!

I was extremely proud of my cousin though. This was her first year to do pageants and as Miss Teen Texarkana she placed in the top 10 in the Miss Teen Texas out of about 49 girls!! Yay Rebecca! 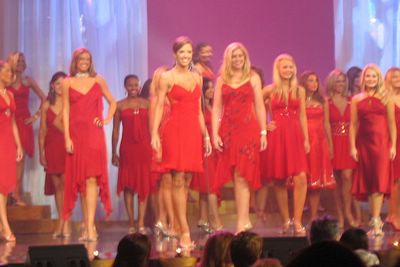 Opening Number - The pageant pics are a little blurry...
sorry...I know you were dying to see them!! (Rebecca's in
the middle) 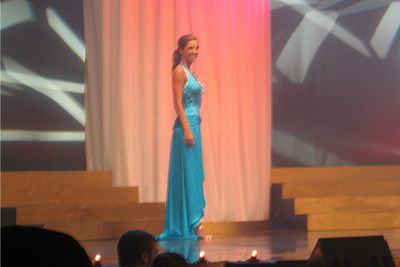 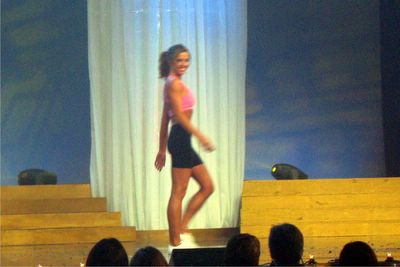 Rebecca in the Fitness Competition 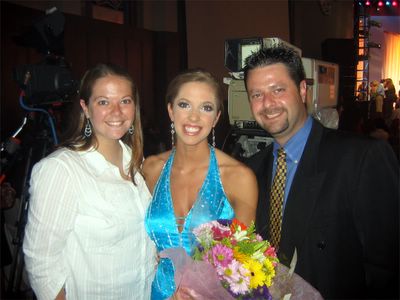 Crying (I never can come up with creative titles)

I mentioned this in my little "about me" section but I'm not sure anyone would take the time to even read that novel I wrote. However, it was reinforced to me yesterday how true it is...I am very much a crier. When I was younger I made fun of my mom all the time for crying at silly things like movies or just happy moments in life...now I think I'm even worse than my mom. I cry a lot. Yesterday, I was watching a recorded Oprah (and Oprah is always one of the worst at making me cry!) and it was one of her Wildest Dreams Come True episodes. One of the stories was about a single mom of nine (3 were hers and she took in 6 of her brother's kids so they wouldn't have to be split up in foster care). Anyone who knew this woman at her job at Starbucks loved her for her sparkling personality. Her family of 10 was living in a run-down 3 bedroom, 1 bath apartment. So Oprah gave her kids a shopping spree at Toys R Us and then gave them all new furniture and appliances and Nate the decorator...and bought them a house!! I was bawling by the end of the story. I'm sitting alone in my den just crying...so happy for this woman and her kids.

One day I was on the treadmill at the rec center watching Oprah and it was about these obese people who had lost hundreds of pounds. I am walking on the treadmill in the middle of all the people at the gym...losing it. Tears are like streaming down my face...I just know everyone is wondering what is wrong with this girl but hopefully they realized Oprah was on my little TV on my treadmill and could understand. Apparently people losing weight is emotional for me because Alison and I were watching MTV True Life at Fat Camp the other day and we were both teary about this guy who had lost like 40 pounds!

Don't even get me started on the Olympics...almost everytime the national anthem plays when we when a gold medal I cry. I love those profile stories that tell of the hard journey and trials an athlete has gone through to get to the Olympics that most people probably fast forward through... I get teary at most everyone. I don't know what it is about the Olympics but just something about the spirit of them that gets to me.

These may seem like pretty normal things to cry about but I've even cried during Survivor one season when some of the cast aways were reunited with family members brought to the island. I can't even begin to list all the truly silly things I have cried over. I guess I'm just an emotional person because I can laugh harder and louder than anyone but boy can I cry too.

To sum all this up you definitely don't want to be sitting by me to watch The Notebook or Beaches.

I feel like a proud mom posting these pictures of Blake but he is just so cute that I had to share! (And especially for Joanie!) After our nice afternoon swim at the Laminacks (since they were nice enough to let us all come over to use their pool...thank you!), Kelly, Joanie, Blake, Frank, MC, Adam, my mom, and I decided to try the new Babe's Chicken in Burleson. I have heard about the one in Roanoke but never made it out there but I had heard it was wonderful. I think I heard too much hype about it because, although it was delicious, I think I had it built up in my head as so much more. But the food and company were great!! Even though Blake was smarter than our waitress as he knew the Governor of Texas is Rick Perry while she had no clue!! 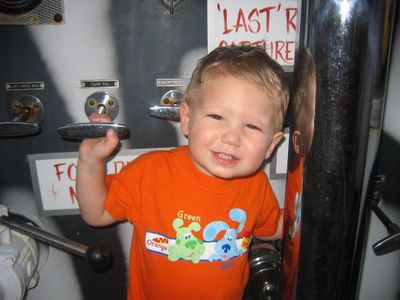 Blake on the Chicken Assault Truck 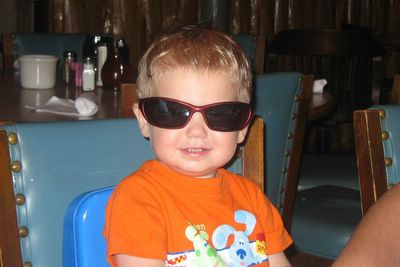 Concert in the Gardens 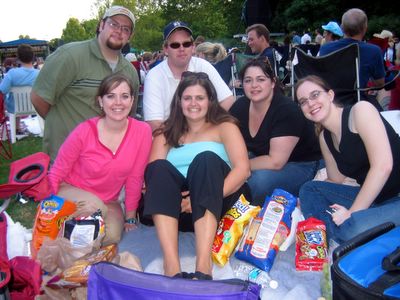 Concert in the Gardens -- Polyphonic Spree 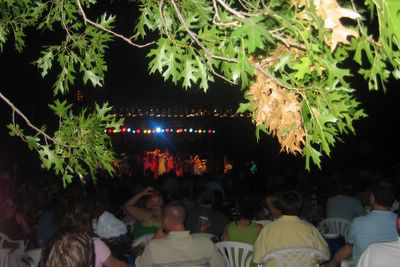